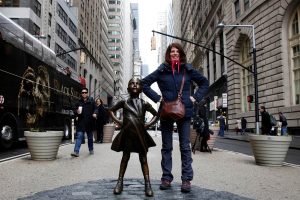 Wall Street in Manhattan is the heart of the financial industry in America. It is here that traders risk it all. They can either earn big or have their savings wiped out. Here are things you did not know about Wall Street:

Number 1. The original name of Wall Street is de Waal Straat, a Dutch name. They used that name at the time when New York was called New Amsterdam, still a Dutch settlement. The reason why it was named Wall Street is believed to be the wall built by the Dutch to ward off the British. The Best New York City Neighborhoods for the Family

Number 4. Because of Wall Street and its adjacent financial district, New York is only second to London in a list of global financial centers. That’s based on the Global Financial Centers Index.

Number 5. In Wall Street, trading begins at 9.30 am in the morning with the ringing of the opening bell at the New York Stock Exchange. At 4 pm, the closing bell is rung to signal the end of trading. It has been a tradition for someone famous or important to ring the bell.

Number 6. The New York Stock Exchange was initially located inside a Wall Street coffee house. That is the Tontine Coffee House which sat on the Wall Street/Water Street junction. In 1817, the Stock Exchange occupied a rented room in a 40 Wall Street building. In 1835, a fire destroyed the building forcing the NYSE to move out. From 1861, the NYSE was located in Broad Street. In 1901, the building was demolished and a new one constructed in 1903. That is where the NYSE is still situated today.

Number 7. In 1987, a movie called ‘Wall Street’ was released as a way of examining the culture of financial excesses and greed that defined the 1980s. The director was Oliver Stone and the lead actors and actresses being Michael Douglas, Charlie Sheen, Martin Sheen, and Daryl Hanna. Its 2010 sequel also had Oliver Stone as director. For a second time, Charlie Sheen and Michael Douglas starred in it.

Of course, there is much more you should know about Wall Street. It is such a fascinating place.